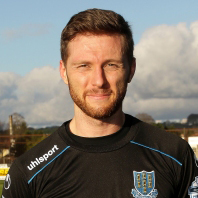 Big Australian goalkeeper who became a cult hero during an impressive first spell in 2015 and returned two years later.

Born to Irish parents, in Brisbane (Australia), Allen moved to the University of Albany in New York State on a soccer scholarship in 2012 and impressed during three years starring between the sticks for the âGreat Danesâ whilst also having a short spell as an amateur for the Carolina Railhawks Under-23 side.

Following his graduation, he travelled to Ireland in an attempt to break into professional football in Europe. Following an unsuccessful trial period at Shamrock Rovers, former Ballymena United goalkeeper Dermot OâNeill recommended Tim to Glenn Ferguson who snapped up the shot stopper in time for a memorable debut in the Irish Cup sixth round victory over Cliftonville at Solitude, which will be remembered for two stunning last minute David Cushley goals but also for the countless superb saves made by the debutant goalkeeper.

Allen continued to impress during the remainder of the 2014/2015 but unfortunately was ruled out of the Irish Cup semi-final due to injury, which the Sky Blues lost 3-1 to Portadown at the Oval. Towards the end of the season Ballymena United facilitated trials for the talented goalkeeper with a number of professional Scottish clubs including Tommy Wrightâs St. Johnstone which came to nothing, and in May 2015 â the goalkeeper returned back to his homeland down under.

In October 2015, ahead of the 2016 Queensland National Premier League season (Australiaâs regional second tier) Tim signed for local club, Brisbane City. However, Allen remained in contact with Ballymena United and returned to Ireland in January 2017 signing another short-term deal with David Jeffreyâs ambitious new look side.