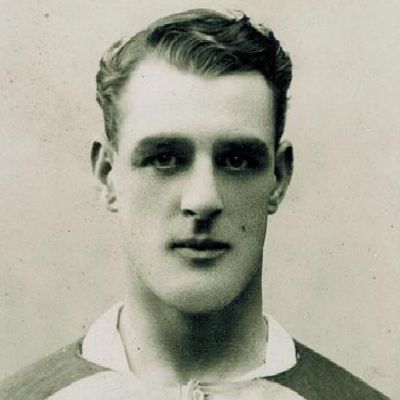 Scottish international forward âTrooperâ Joe Cassidy was a high profile signing for Ballymena midway through their debut season and was a key part of the 1929 Irish Cup winning team.

Having started his career with Vale of Clyde, Cassidyâs ascent into professional football was meteoric. Following a trial match for Glasgow giants Celtic shortly after his sixteenth birthday in October 1912, he signed on at Celtic Park the following month â making his competitive debut against Motherwell in March 1913 (in a 1-0 defeat). It was one of three appearances for the Celtic first team during the talented teenagerâs debut season.

The following season, Celtic utilised the fluid nature of player registrations of the time to gift Joe first team experience at a variety of clubs throughout the 1913/1914 campaign. No less than four loan spells were arranged during the season; short one game cameos for Vale of Atholl (Perthshire League), Kilmarnock (First Division), Abercorn (Second Division) all before Christmas proved successful, this was then followed by a move to Ayr United in December 1913 for the remainder of the clubâs debut top flight campaign. Joe only managed one appearance for his parent club, as Celtic won the Scottish League for the eleventh time.

A further spell at Ayr United at the start of the 1914/1915 season allowed the diminutive forward to continue making his name in the game, even scoring the only goal in a 1-0 win against Celtic in October 1914. Following the outbreak of the First World War in the early stages of the season, Cassidy enlisted with the Black Watch (Royal Highlanders) 1/7th Fife Battalion where picked up the nickname âTrooper Joeâ and also earning a military medal during his service. Still only 19 years old and well thought of at Parkhead, a trio of early season appearances for Celtic were his only action in a hooped shirt, as much of the 1915/1916 season was spent representing the Black Horse army team. There were further loan appearances either side of the border, firstly with Clydebank in September 1915 and then a first foray into English football in January 1916 with struggling Reading â who were propping up the war-time London Combination league.

Football took a back seat for Joe during the 1916/1917 & 1917/1918 seasons at the height of the conflict, as the talented forward was restricted to making a handful of appearances for Celtic during periods of leave in his native Glasgow. He unexpectedly returned for good to Scottish shores on Hogmanay 1918 and was drafted straight into the Celtic team for the New Yearâs Day draw against Rangers at Ibrox in front of 65,000 fans. His landmark first goal in Celtic colours followed a few weeks later in a win against Clydebank, as Joe chalked up half a dozen appearances during the second half of the 1918/1919 season, but fell short of accumulating enough appearances for a league winnersâ medal, as Willie Maleyâs men won their fourth Scottish League title in five years.

Joeâs breakthrough season at Parkhead finally arrived during the 1919/1920 campaign at the age of 23, he picked up a first winnersâ medal following the narrow Glasgow Cup victory over Partick Thistle in October 1919. From October onwards, he retained his place as a regular on the team-sheet making 32 appearances, albeit with a disappointing return of only six goals as Celtic finished runners-up to Rangers in the league. Cassidyâs industrious style of play made him a massive favourite in the Celtic support as although diminutive in stature and displayed wonderful attacking skills and was an impressive header of the ball. The goals began to flow come the 1920/1921 season as Joe won plaudits for a 1921 New Yearsâ Day derby against Rangers, scoring both goals against bitter rivals Rangers, the new talisman would eventually bag a personal best to date of 20 goals and another Glasgow Cup winners medal despite eventually trailing Rangers by ten points in the league table come May.

International recognition came Joeâs way during the successful 1920/1921 season, firstly a debut for the Scottish League representative team in January 1921 against the Irish League (in which he scored in the 3-0 win) was quickly followed by the honour senior selection for British Home Championship clashes against Wales (at Pittodrie) and then Ireland (at Windsor Park). Scotland won both games with Cassidy scoring his first international goal in the latter game, en route to the Scots winning the Championship outright. The league winnersâ medal which had eluded Joe since he signed for Celtic almost ten years ago finally arrived at the end of the 1921/1922 season, as Celtic eclipsed Rangers by a single point in the standings. Cassidyâs contribution was again impressive, finishing as the clubâs top goalscorer with 20 goals.

Cassidy wrote his way into Celtic folklore the next season as he (almost singlehandedly) brought the Scottish Cup back to Parkhead after a nine year absence. He scored 11 of Celticâs 13 goals throughout the 1923 tournament, including heading home the decisive winning goal against Hibernian in front of 82.000 fans at Hampden Park. Their cup exploits were the highlight of the campaign as Celtic dropped finished third in the Scottish League, but Cassidyâs career best 34 goal haul merited a return to the Scotland side for a third cap against Ireland in March 1923.

The Cup final heroics were to prove the pinnacle for Cassidyâs Celtic career, as despite finishing top goalscorer at the club during the 1923/1924 season and winning a fourth (and final) Scotland cap along with selection for the Scottish League side â Joe was made the scapegoat for the collective failings at Parkhead. Celtic again finished third (behind Rangers and Airdrieonians) and were knocked out of the Scottish Cup at the first hurdle of their defence of the trophy. There was a sea of change at the club and the clubâs main forward was allowed to leave, which began a culture of selling key assets at the club which lasted until their return to prominence in the 1960âs. Joe Cassidy finished his Celtic career with 212 appearances and 108 goals between 1912 and 1924, and will be noted as an all-time great at the Glasgow club.

In August 1924, Cassidy (now 28) secured a move to top English First Division side Bolton Wanderers for Â£4,500, a major money move at the time, to join a full suite of international forwards at the Lancashire club. The forward ultimately failed to settle at Burnden Park, after an indifferent start his progress was halted by a serious dose of influenza midway through the season, which also resulted in a 22lbs weight loss and an impact on his stamina levels thereafter. In March 1925, he sought a place on the transfer-list from the Bolton officials citing that the âclimate didnât agree with himâ and was angling for a move back to Scotland. There had been press speculation of a move to Rangers, but the desire for Bolton to recoup any transfer fee would rule out move back North. Cassidy made 22 appearances, scoring 7 goals for the Wanderers during the 1924/1925 season.

The transfer saga rumbled on until October 1925, as once Bolton finally granted the transfer there was several suitors interested but a deal was struck with First Division rivals Cardiff City who paid Â£3,500 for Joeâs services. It proved a similar unfortunate story for the talented striker with his new club with only half a dozen goals returned for the club (in 24 games), he continued to struggle to return to past glories physically and was eventually dropped by the Welsh club in March 1926.

Despite offers from English clubs Everton and Tottenham Hotspur, Cassidy completed his desired move back to Scotland in August 1926 with Dundee, as part of an exchange deal which seen half-back Sam Irving move to the Welsh capital. Despite an injury plagued campaign Cassidy brought moderate success to Dens Park, as the team finished in fifth in the table in his first season (1926/1927) but fell away to 14th during his second season (1927/1928).

Joe was on the move again across the division to Clyde in June 1928 for Â£500 after his stay at Dundee turned sour, but his nomadic journey through football wouldnât even last a full season this time.

It was in late January 1929 that Cassidy crossed the Irish Sea to join Ballymena; the Braidmen were enjoying a fine debut season in Irish League football and the Scotland international was a huge coup as they went in search of silverware. A debut goal in the 7-0 thrashing of Queenâs Island in February 1929 was the perfect start to life in Ireland for Joe, who could now lay claim to playing professional football in all four home nations. Cassidy would form part of the legendary Ballymena side that lifted the Irish Cup a month later â defeating league champions Belfast Celtic 2-1 at Solitude to stun local football. Joe settled quickly into life at the club with his efforts appreciated by the enthusiastic Ballymena support.

His second season was distributed by an internal suspension at the start and illness at end of the campaign, but Cassidy made 29 appearances (scoring 15 goals) as the Braidmen navigated through the expectation of their second season with another Irish Cup final appearance, this time losing 4-3 to Linfield at Celtic Park with Joe the star performer from Ballymenaâs forward line. Joe also notably scored the winning goal against English First Division side Everton in a friendly and made his debut for the Irish League representative side against the League of Ireland in March 1930. Speculation mounted of a move to Shelbourne towards the end of the season but he eventually agreed terms to stay with Ballymena for a further season.

Now the veteran 34-year-old of the Ballymena side, Joeâs third and final season (1930/1931) at the Showgrounds ended disappointingly. Despite adding two more Irish League representative caps to his name in the Autumn of 1930, his season was marred by the sudden accidental death of his seven year old son in Scotland, Joe had raced back to Paisley to assist with a blood transfusion to no avail in January 1931. He didnât miss a game for the Braidmen during this time and in one of his final appearances, lost out in his third consecutive Irish Cup final to Linfield. Two weeks later, following a dispute with club officials he requested his papers to leave the club and immediately returned to Scotland. An unceremonious exit for one of the Sky Bluesâ earliest heroes, having finished up with 84 appearances and 29 goals in his two and a half seasons at the club.

With one eye on coaching, Cassidy was a reported front runner for the role as trainer of the Turkish national team in the summer of 1931 but despite appearances in trial matches for Montrose, Joe signed for Morton in August 1931 on a monthâs trial. After just five appearances without any goals â he returned back to Ireland, this time with Dundalk in the Free State League in September 1930. Joe rolled back the years during a short spell at the Louth club during the 1931/1932, winning the Presidents Cup in his second game for the club in a 7-3 win over Shamrock Rovers. In January 1932 he left the club to return to Scotland once again after 19 appearances and 5 goals for the Lilywhites.

Dundalk proved to be the end of the road for Joe in football. He failed to find a club for the remainder of the 1931/1932 season and subsequently failed in a bid to become player/manager of Peterhead in June 1932. By the following summer (1933) he was sentenced to four months in prison for his role in a burglary in Scotland.

Cassidy passed away in July 1949 in Glasgow aged 52, following complications from stomach surgery to remove cancer.