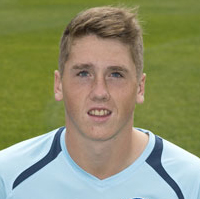 Loanee signed by Glenn Ferguson in August to shore up a leaky defence on the recommendation of St. Johnstone (and former Ballymena) manager Tommy Wright in August 2015.

The big 21-year-old Edinburgh born central defender had progressed through the ranks at the Perth side, and was on the fringes of the first team following loan spells at Brechin City (2012/2013) and Montrose (2014/2015) but failed to make a single appearance. It was following Ballymena Unitedâs poor start to the 2015/2016 season in which they had conceded 13 goals in three games, that manager Ferguson reached out to his friend Wright to assist, quickly striking a loan deal for Gareth until January.

Rodger failed to stop the rot on his debut, losing 2-0 to Dungannon Swifts but quicky endeared himself to the United faithful with a 93rd minute equaliser against Ballinamallard United in September. Commuting from his native Scotland, Gareth made 16 appearances during the first half of the season, before being recalled in January 2016 â playing his final game of his temporary spell in a thrilling 4-3 victory over Portadown on New Yearsâ Day.

Following a return to St. Johnstone, his six association at St. Diarmud Park ended at the end of the transfer window by mutual consent as he sought first-team football. Rodger initially joined League One side Forfar Athletic in February 2016 before re-joining former loan side Brechin City in July 2016 who also were competing in the same division.