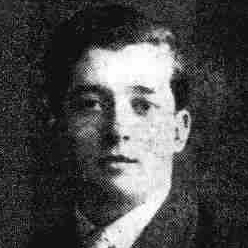 Junior International capped forward who played in the clubâs first ever game in 1928 but failed to hold down a regular place in the Irish Cup winning side.

Belfast born Websterâs footballing career began as a teenager in the mid 1920âs, having initially started out with the Queenâs Island second string during the 1924/1925 season and then a move to Dunmurry of the Intermediate League the following (1925/1926) campaign.

It was at Dunmurry, Webster enjoyed his breakthrough season, impressing many onlookers as an inside forward who was comfortable on the flanks. This prompted senior Irish League club Larne to take a chance on the 19-year-old in March 1927. Having originally been signed to play for the clubâs Olympic (Reserve) team, he was swiftly elevated to the first team â making a senior debut against Queenâs Island in the City Cup. The final two months of the season seen Sydâs stock rise as an up and coming player in the league.

Webster suffered a major blow in September 1927, as a bout of pneumonia proved almost life threatening and kept him out of action until the New Year. Syd was transferred to Dundela in a bid to bid to return to full fitness. His spell with the East Belfast club included a call up to the Irish Junior International team for the 2-1 defeat to Scotland at Solitude in March 1928.

The forward returned to senior football in the summer of 1928, throwing his lot in with the newly formed Ballymena team in June, becoming one of the first signings made by the Braid clubâs selectors. Syd lined up on the wing for the clubâs first ever game against Belfast Celtic in front of a packed Showgrounds. Webster featured in each of the clubâs first five competitive games, but lost his place to Richard Shaw in September and never found a way back into the team, as the Braidmen went onto historically win the Irish Cup in their first season.

Having sat out the entirety of the 1929/1930 season, Syd returned to competitive action for his former club Dundela in 1930 and played for two seasons until he relocated to England for business reasons, where he remained, having married in Kent in 1937. Sydney Webster passed away in Redbridge (Essex) in August 1986, aged 79 years.