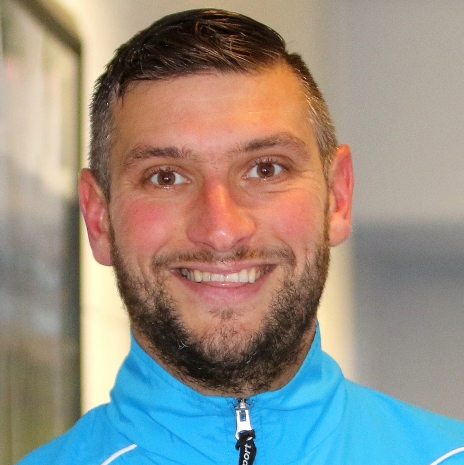 Well travelled veteran Welsh striker Matthew Tiptonâs last stop of a stellar professional football career was with Ballymena United for two years, of which he was top goalscorer during the 2014/2015 campaign before retiring in April 2016.

Born in Bangor (Wales), âTippyâ started his career as an apprentice with Oldham Athletic where he made his professional debut in December 1997, after over 100 appearances with the Silkmen he moved to Macclesfield Town in February 2002. He had also earned caps at Under-21 level for Wales during his time with Oldham. Macclesfield proved to the most prolific time of his career in the Football League as he went onto enjoyed three separate spells at Moss Rose between 2002 and 2010. There were short spells at Mansfield (2005) and Bury (2005-2007) as well as a spell in non-league football with Hyde United and Droylsden.

Following release from his third spell at Macclesfield Town, Matthew made his first venture into Irish football with League of Ireland side Dundalk in July 2010. Ronnie McFall persuaded the Welsh forward to join Portadown in December 2010 on an 18 month contract and enjoyed a rich vein of form in front of goal at Shamrock Park which lead to another move for the now 32-year-old â to David Jeffreyâs League Champions, Linfield.

Two seasons at Windsor Park did not go to plan for Matthew due to injuries and the dominance of rivals Cliftonville, which also meant the end of Jeffreyâs 17-year- tenure. Following his release from Windsor Park, Glenn Ferguson moved very quickly to snap up the veteran goal-getter in May 2014 initially on a one year deal with Tipton declaring âthe negotiations took only a matter of minutes â I knew speaking to Glenn (Ferguson), Ballymena was the club for meâ. The move proved a master-stroke; Tipton finished top goalscorer with 19 goals in all competitions and picked up a League Cup final runners-up medal following the defeat to Cliftonville in January 2015.

His second season was plagued by niggling injuries which cost Tipton a place in the victorious County Antrim Shield final team, following frank discussions with new United boss David Jeffrey, his contract was mutually terminated in March 2016 with Matthew eventually declaring his retirement a few months later after 28 goals in 69 appearances for the Braidmen.

Following the closure of his playing career, Matthew moved into coaching in May 2016 â joining Barry Grayâs staff at recently relegated Warrenpoint Town. In November 2016, he was elevated to the position of first-team manager with Grayâs blessing with his first match of his managerial tenure ironically coming against Ballymena United in the NI League Cup quarter-final.