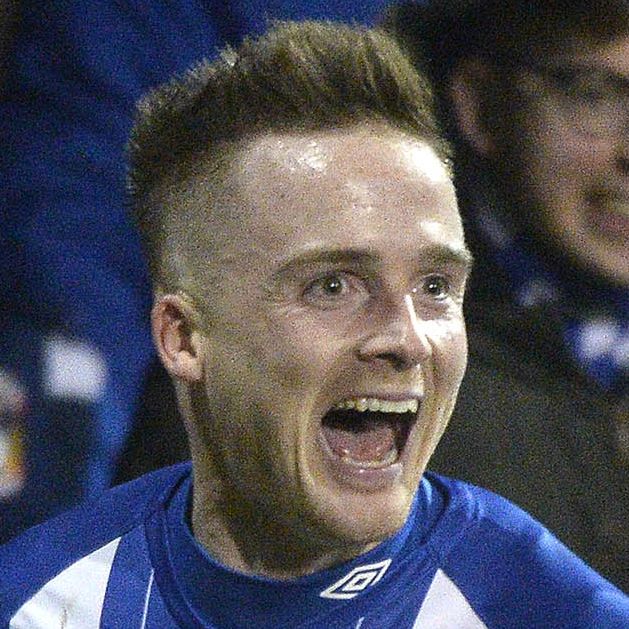 A disappointing United career which barely lasted a full season after joining from Coleraine in August 2019, with his contract terminated by mutual consent just days after his final appearance in the Irish Cup final.

Born in Banbridge, his career flourished quickly playing alongside twin brother Andrew at the Linfield Academy. Initially playing as a full-back, Aaron enjoyed trials at both Leicester City and Everton before making his senior debut at 16 years old for Linfield in December 2008 as a late substitute in an away victory against Coleraine under the tutelage of David Jeffrey. International recognition followed through a call up to the Northern Ireland Under-17 panel, adding to his caps at Under-16 Schools level.

Burnsâ progress was rapid at Windsor Park, as by the 2009/2010 season he found himself regularly competing for the left-back berth and making 19 appearances for the first team, which earned the teenager a first league winnersâ medal as the Blues once again lifted the Gibson Cup. Aaron was also an unused substitute for the Irish Cup final victory over Portadown which sealed the league and cup âdoubleâ for Linfield.

The 2010/2011 season proved the real breakthrough season at Linfield for Aaron, having started both legs of a narrow 2-0 aggregate defeat to Rosenborg in the UEFA Champions League qualifiers for his first taste of European football, cemented his place as a first-team regular at left-back for the Blues and a two year professional contract at just 18-years-old. Burns scored his first senior goal in October 2010 against Newry City as Jeffreyâs men once again cantered to the Gibson Cup. The cups were proving unkind to the young player, firstly losing the County Antrim Shield decider against Glentoran and then failing to make the Irish Cup final panel as Linfield retained their trophy against Crusaders in May 2011.

Aaron added goals to his game in the 2011/2012 season as Jeffrey began to utilise the Banbridge player in a more advanced midfield role â as he netted nine times en-route to a third successive league and cup combination for the dominant South Belfast club. However, Burns once again was omitted from the Irish Cup final squad which began a summer of discontent between the club and player. The 20-year-old refused to sign the contract extension offered by Jeffrey in the summer of 2012 and no resolution could be found by the start of the 2012/2013 campaign.

In January 2013, Aaron joined his brother at Portadown for the remainder of the season on an amateur form. He made a 14 appearances for Ronnie McFallâs side during a disappointing campaign which seen the Shamrock Park club finish in the bottom half of the table. By May, any differences between Aaron and his former club seemed to have been resolved, as he returned to Linfield on his 21st birthday â citing his regret over leaving in the first place.

Burns marked his return with a memorable first European goal in the 1-0 away win over Greek side Skoda Xanthi in the UEFA Europa League qualifiers. However, in his short time away from the club there had been a sea-change at the top of the Irish League, as Linfield had surrendered their title to Cliftonville the previous season and during the 2013/2014 once again failed to stop Tommy Breslinâs rampant Reds from making it back-to-back titles. It would spell the end for his mentor David Jeffrey at the helm of Windsor Park after seventeen years in charge. The Blues finished the season with only the County Antrim Shield in the trophy cabinet, with Aaron scoring in the penalty shootout victory over Crusaders at the Ballymena Showgrounds in March 2014.

Warren Feeney entered the fray as the new Linfield manager, and despite the upheaval in players Aaron began to flourish as dangerous attacking player for the Blues â earning himself his only cap at Under-21 level for Northern Ireland against Serbia in September 2014. Linfield finished runners-up in the league, this time to Crusaders, but Aaron proved a stand-out performer picking up several Player of the Year awards during the 2014/2015 campaign in which he hit 20 goals.

By October 2015, Feeney had departed and Northern Irelandâs record goalscorer David Healy was appointed â as Burnsâ game rose to a new level with a career best 27 goals during the 2015/2016 campaign for the now 23-year-old, only team-mate Andrew Waterworth and Paul Heatley scored more in the league. Despite his goalscoring accolades, Aaron failed to deliver debut silverware for Healy, finishing runners-up for the third successive season and suffering defeats in both the County Antrim Shield (to Ballymena United) and Irish Cup (to Glenavon), despite home advantage in both games. For the first time in his career he was named in the NI Football Writersâ Team of the Year as recognition of his performances throughout the season.

With over 200 appearances under his belt for the club, Aaron became one of the most experienced figures in Healyâs first full season at Windsor Park as the Gibson Cup made itâs way back to South Belfast for the first time in five years at the end of the nail-biting 2016/2017 season. Burns scored the winner against leaders Crusaders in the post-split meeting at Seaview and that impetuous gave Linfield the confidence to pip their cross-city rivals on the final day of the season. The influential midfielder added a second Irish Cup winners medal to the collection in May 2017, as Linfield swept aside Coleraine in the final at the National Stadium.

From the high of the becoming league and cup champions to the lows of the 2017/2018 season. Burns failed to feature in either legs of Linfieldâs landmark Champions League clash with Celtic and suddenly found himself out of favour as Linfield struggled to replicate their form in an indifferent season. Aaron unwittingly played his last game for the club in November 2017, coming off injured against Glenavon at Mourneview Park. By the January transfer window, manager David Healy advised the 25-year-old that he would not be offered a new contract at the end of the current season and was placed on the transfer list.

Both Ballymena United and Glenavon were the front-runners for Aaronâs signature, and there was also a formal bid from League 2 club Crawley Town â but the player rejected the opportunity of full-time football under manager Harry Kewell, citing his business interests at home. Coleraine boss Oran Kearney swooped late in the window to add Aaron to his title challenging panel on a two-and-a-half year deal, but he only managed a supporting role in the second half of the season as the Bannsiders missed out on a first Irish League title since 1974 on a dramatic final day of the 2017/2018 season. Coleraine picked themselves up the following week to win the Irish Cup against Cliftonville, with Aaron coming off the bench to score his first goal in the showpiece game and make it back-to-back winners medals with two different clubs.

Influential manager Kearney departed for St. Mirren early in the 2018/2019 campaign and was replaced by Rodney McAree in what was to become a frustrating season for both club and player. Aaronâs season was blighted by niggling injuries as Coleraine dropped to sixth place in the Premiership standings, making only three appearances after the turn of the year.