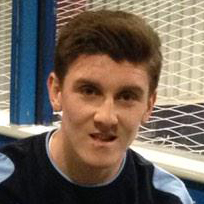 A tall no nonsense central defender who spent a season and a half at the Showgrounds after joining in January 2015, will be best remembered for scoring in the 2016 County Antrim Shield final against Linfield.

The Belfast native was a product of the Cliftonville Football Development Centre but moved to Celtic in July 2011 on a three year professional deal. McNally failed to make a breakthrough at the Glasgow Hoops but was a regular in Northern Irelandâs underage youth teams with caps at Under-17 and Under-19 level and a single Under-21 appearance against Cyprus in May 2013.

In August 2013 aged 19, McNally returned home to his boyhood club Cliftonville on loan for the remainder of the season whilst continuing to train with his parent club during the week. His role was limited to that of a squad player as the Reds retained their NIFL Premiership title during the 2013/2014 side. Following the expiration of his contract at Celtic Park, Paddy joined Gary Hamiltonâs Glenavon side in September 2014.

The defenderâs stay at Mourneview Park lasted only half a season before Glenn Ferguson moved to bring McNally to the Showgrounds during the January window on an 18-month contract. Despite his wholehearted performances, holding down a regular place in Fergusonâs starting eleven proved difficult during his time at Warden Street. Fortuitously McNally found himself starting the County Antrim Shield final in January 2016, due to Johnny Taylorâs suspension and his name will be forever etched in the history of the club as he scored the opening goal in a famous Shield final victory.

In May 2016, new Ballymena boss David Jeffrey announced that McNally would not be offered a new contract with the Sky Blues after 24 appearances and 2 goals. The central defender joined Carrick Rangers in July 2016.