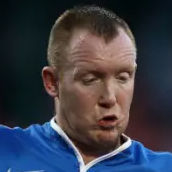 More accustomed to thwarting Ballymena United forwards during a decade at derby rivals Coleraine, Kyle McVey proved to be a reliable central defender during two and a half seasons at Warden Street.

McVey burst onto the scene in 2003 as a teenager and became a mainstay of the Bannsidersâ defence during the first decade of the new millennium whilst also picking up Northern Ireland international honours at Under-19, Under-21 and Under-23 level, including winning the Milk Cup with the âEliteâ team.

Despite his best efforts there were no winnerâs medal from his time at Coleraine, runners-up in the Irish Cup (2008) and League Cup (2010) were as close as McVey came to major domestic honours in the Irish League. Injuries hampered his final years at the Ballycastle Road but he chalked up almost 300 appearances for his hometown club during a nine season spell.

In August 2013, McVey rejected the offer of a new contract and a potential testimonial with the Bannsiders to surprisingly join David Jeffreyâs Linfield side on a one year deal. It proved to be only a short 22 game stay, as Jeffrey departed Windsor Park - the defender was deemed surplus to requirements for new Bluesâ manager Warren Feeney in May 2014.

The next move was to join his old rivals Ballymena United in August 2014, after spending pre-season on trial at the Showgrounds. McVey made his debut in the Charity Shield defeat to Cliftonville. His first season at Warden Street was prematurely cut short in November, after he suffered a broken ankle against former club Coleraine which ruled Kyle out for virtually the rest of the season.

29-year-old McVey bounced back stronger for the 2015/2016 season but also missed the County Antrim Shield final victory over Linfield in January due to injury. However, under new United manager David Jeffrey, Kyle found a new lease of life and finished the season in good form, earning a new one year contract extension. However, having missed the start of the 2016/2017 season due to his honeymoon, the defender found himself well down the pecking order at the Showgrounds and failed to make an appearance for the in-form Sky Blues during the first half of the season and was loaned out to Aaron Callaghanâs Carrick Rangers in January 2017.

McVey played a key part in the East Antrim side surviving relegation (even scoring in the playoff) but had already played his last game for the Sky Blues as he was released in May 2017, by the end of the month he had secured a new club, as he became one of another of Niall Currie's signings ahead of the rebuilding job at recently relegated Portadown.