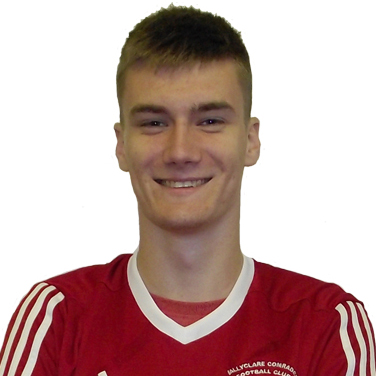 Ballymena born central defender who progressed through the Youth Academy to the fringes of the first team before moving to Ballyclare Comrades.

Johnston stood out through Unitedâs youth ranks as a tall yet talented central defender, progressing into the Thirdsâ team as a 16-year-old at the start of the 2012/2013 and quickly into David Dorrianâs second string the following season. After his impressive season during the Reserves, he was gifted an opportune debut for the senior team as part of arguably the clubâs youngest ever team in April 2014 against Ards, as manager Glenn Ferguson rested his entire first-team ahead of the Irish Cup final the following week.

The 18-year-old defender stayed on the periphery of Fergusonâs squad for the 2014/2015, only making the bench as a unused substitute once as he picked up the Reserve Team Playerâs Player of the Year. The following season, âJontyâ was allowed by Ferguson to make the move to Championship 1 side Ballyclare Comrades in January 2016 to gain valuable senior experience. He made just over a dozen appearances for the Dixon Park outfit as they finished mid-table in the second tier under manager Stephen Hughes.

Jason returned to the Ballymena Showgrounds for pre-season under a new manager in David Jeffrey (appointed in March 2017) and impressed enough to feature in the squad of Unitedâs early season Premiership fixtures. However, a return to the Comrades in August 2016 was setup to further assist the youngsters development for the remainder of the season. Johnston flourished as a first-team regular as Ballyclare impressed many as the surprise package of the Championship, pushing for promotion firstly under the aforementioned Hughes, before his former Ballymena United youth coach Clifford Adams took over towards the end of the season. The Reds unfortunately succumbed to Institute in the Championship playoffs in May 2017 to end any lingering promotion hopes.

In April 2017, Johnston committed himself to Ballyclare Comrades for the following 2017/2018 season, effectively ending his association with Ballymena United.