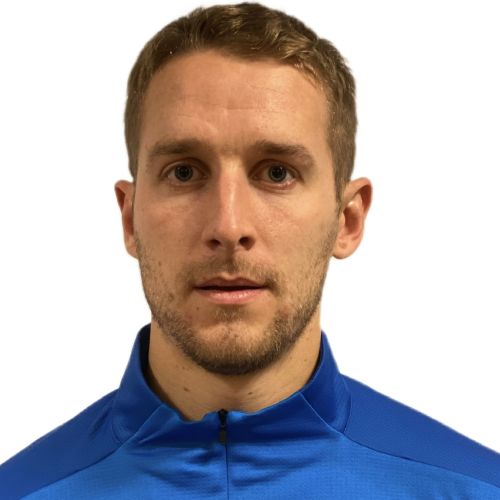 Commanding central defender who joined from Glentoran in 2018 and quickly established himself in David Jeffrey's resurgent Sky Blues.

Originally born in Newry, Addis also resided outside Ballymena in his childhood before settling in Carrickfergus. It was at his hometown club in which he made his senior football breakthrough, after initially starting the season at Carrick Rangersâ Under-18 side â Jonny made his bow as a striker under Stephen Small in an Intermediate Cup win against Crewe United.

Addis was used sparingly as Rangers eventually finished fifth in the 2009/2010 Championship 1 table, but changes were afoot at Taylorâs Avenue with former Northern Ireland international taking over the East Antrim club as their new owner after months of speculation.

Rangers recruited more experienced players with promotion the primary aim for Small and Hughes, leaving teenager Addis fighting for game time, being used as a left-sided midfielder and as a forward during the 2010/2011. The season reached a dramatic climax with Carrick winning two trophies on the same evening, as upon clinching the Intermediate Cup (Jonny didnât make the squad for the final), news filtered through that results elsewhere had confirmed the club as league champions and promotion back to the top flight secured.

Forced to play all their âhomeâ games at Seaview during their return to the Premiership, it was a difficult campaign for Carrick as their stay only lasted a single season in the top-flight. Addis found himself frozen out of the side until the sacking of Stephen Small; Hughes took the reins himself and immediately elevated the 19-year-old back into the fold for his top-league debut in December 2011. Jonny would feature regularly in the second half of the season, but with a high turnover of players, Carrick could not force a path to safety and were eventually relegated after finishing bottom of the table. On a brighter note, Jonny chalked up his first senior goal for the club on the final day of the season in a 5-3 win against Donegal Celtic, ironically now managed by his former mentor, Stephen Small.

The 2012/2013 campaign was arguably the coming of age for Jonny as the rebuilding job started once again for Carrick back in the second tier. Addis was a regular figure playing across the midfield and occasionally at the back, as he picked up the clubâs Young Player of the Year award as the club eventually finished fifth in Championship 1 after being on the fringes of the promotion pack all season.

After letting his contract run down at Carrick (and despite tentative interest from Ballymena United), Addis signed for Irish Cup holders Glentoran in August 2013 with Eddie Patterson on a two year contract. The same summer, he travelled to Kazan in Russia to successfully represent the Irish Universities in the World Student games.

From making his debut against Glenavon on 17 August 2013, Addisâ fledgling Glentoran career was impressive as he became a regular in the starting eleven under Patterson despite being only 21 years old during most of his first season in East Belfast. Glentoranâs off the field woes would occasionally become a distraction as despite concerns for finances, pressure still mounted for silverware with the club finishing fifth (2013/2014) and sixth place (2014/2015) in his first two seasons.

Success came in the form of the Irish Cup in May 2015, with Jonny coming off the bench in the 1-0 win for Glentoran against Portadown at The Oval The Irish Cup victory also meant an opportunity to compete on the European stage for the first time in his career, as Glentoran bowed out of the Europa League lost to Slovakian side MÅ K Å½ilina â as Jonny came off the bench in both legs. There was more luck in the Charity Shield in August 2015, as a single Jordan Stewart goal gave the Glens the trophy against Crusaders.

Pattersonâs increasingly fractious relationship with the Oval hierarchy came to a head in October 2015, as he was sacked and replaced with Alan Kernaghan taking his place. For Jonny, he passed the 100 game mark for Glentoran who once again finished the season in mid-table (sixth) in the final 2015/2016 Premiership standings.

His form for the Glens earned him a new two-year-contract despite concerns he would be forced to leave the club as moved to Liverpool for the 2016/2017 to complete his teaching qualifications. Kernaghan only lasted a month into the new season before becoming the latest sacking in the Oval hotseat after losing to Annagh United at the first hurdle of the League Cup. In came former Ballymena United captain Gary Haveron to steady the ship. Glentoran's struggles continued though, as they finished the season in ninth position in the table, the lowest standing for the club in many years.

Despite the early season optimism of the start of Haveron's first full season, results still weren't to meet the high expectations of the East Belfast faithful. Haveron fell foul of the axe in February 2018 and was replaced by veteran Ronnie McFall. By this stage Addis had already begun to question his future at the club and with six months left on his contract, was free to talk about his options with other clubs.

That option proved to be David Jeffrey, as Addis signed a pre-contract with Ballymena United and joined up with the Sky Blues ahead of a memorable 2018/2019 campaign. Completely revitalised, the new look Braidmen soared to the top of the table at Christmas with Jonny one of a number of standout performers in the heart of the United defence.