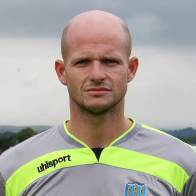 Decorated international goalkeeper who had two separate short spells at the Showgrounds.

Alan Blayney progressed from his home in North Belfast to the English Premier League during his formative footballing years, moving to Southampton in 2001. However, he was to make his professional debut on loan at Stockport County in October 2002 but had his spell at Edgeley Park cut short due to a broken finger, in December of the same year he had a short emergency loan spell at Bournemouth as well.

Back at Southampton, Blayney started the 2003/2004 season as third choice goalkeeper but eventually made his Saintsâ debut in May 2004, with both his peers out of action for the visit of Newcastle United to St. Maryâs. The 22-year-old shot to prominence during his debut making a world class save from a point blank Alan Shearer header which Sky Sports honoured as their âSave of the Seasonâ, the game finished 3-3 in front of over 31,000 fans. Despite his heroics there was only a handful more appearances for Alan at the South coast.

Another loan emergency loan spell in December 2004 with third tier Rushden & Diamonds was followed by an opportunity to be part of Brighton & Hove Albionâs Championship run-in to the 2004/2005 season as they successfully avoided relegation. Following a positive impression, Mark McGhee brought Alan back to the Withdean Stadium for a second loan spell for the first half of the 2005/2006 season but financial problems preventing a permanent deal being made despite the Seagullsâ best efforts.

In January 2006, George Burley sold the out of favour goalkeeper to League 1 side Doncaster Rovers for Â£50,000. He finished the season strongly and won his first Northern Ireland cap in May 2006 against Romania during a tour of the United States. However, after falling down the pecking order at Rovers, his contract was terminated by mutual consent in January 2007, before joining Oldham Athletic a month later on a short term deal until the end of the 2006/2007 season.

The Latics would be his last Football League club, as following the expiration of his deal he returned to Ireland to sign for League of Ireland side Bohemians in August 2007, but couldnât dislodge first choice goalkeeper Brian Murphy during the 2007 season and only made a handful of appearances at Dalymount Park before returning home to Northern Ireland for his next stop.

That marked his first spell at Ballymena United, the 26-year-old having been signed by Tommy Wright in March 2008, despite being unable to play for the remainder of the 2007/2008. United were on the up having finished sixth in the Premier League, but Blayney was rocked by Wrightâs resignation only a month later â with Roy Walker taking the helm at the Showgrounds. Alan made his debut for the Sky Blues in August 2008 against Ballyclare Comrades in the County Antrim Shield, but suffered a nightmare start to life at the Showgrounds with eight defeats from the opening ten league games and even losing his place to Sean OâNeill. He regained his place in October 2008, as United slowly eased their way from relegation trouble and after a shaky start for the goalkeeper his performances between the sticks were a rare highlight for the Sky Blues.

Those performances drew the attention of Linfield manager David Jeffrey who sought a replacement for outgoing goalkeeper Alan Mannus, and signed Blayney on a three-year deal at the National Stadium in June 2009. Despite another nervous start in front of the demanding Linfield crowd, he began to enjoy the most successful spell of his career. Alan won the Irish League and Irish Cup âdoubleâ in his first season at Windsor Park and in turn a recall to the Northern Ireland side. The following season Jeffrey, Blayney and Linfield repeated their âdoubleâ feat with Alan captaining the Windsor Blues in the showpiece final against Crusaders.

2011/2012 marked yet another âdoubleâ for Linfield and Blayney, but it was the start of the injury concerns that would plague his final years at the Blues, as he missed large periods of the following season (including the County Antrim Shield final defeat to Ballymena United) and didnât feature at all during the 2013/2014 season as Jeffrey brought in Jonathan Tuffey from St. Johnstone, resulting in Alan spending the second half of the season and final six months of his contract on loan at newly promoted Ards.

After over 150 appearances at Linfield, he was released to join Irish Cup holders Glenavon on a two year-deal in April 2014, the spell at Mourneview Park only lasted a single season after falling out of favour towards the end of the 2014/2015 season. Glenavon manager Gary Hamilton allowed Glenn Ferguson to sign 33-year-old Blayney on a free transfer in May 2015 to have a second spell at the Ballymena Showgrounds with the Sky Blues.

Following yet a similar shaky start to his second spell that mirrored his first, he usurped Dwayne Nelson as first choice goalkeeper in the second half of the season in time for the County Antrim Shield final victory over Linfield in January 2016 for his first senior medal away from the Blues. However, despite the introduction of his former boss Jeffrey to the Showgrounds hotseat, he would again lose his place as number one, this time to Ross Glendinning at the Showgrounds for the 2016/2017 season as part of Jeffreyâs Sky Blue revolution. His contract was cancelled early by mutual consent in January 2017, with the now veteran goalkeeper dropping down to the Championship to join Dundela for the remainder of the season.

Following their promotion back to the NIFL Premiership under former United forward Matthew Tipton, he made Alan one of his first summer signings in May 2017 ahead of the new season.