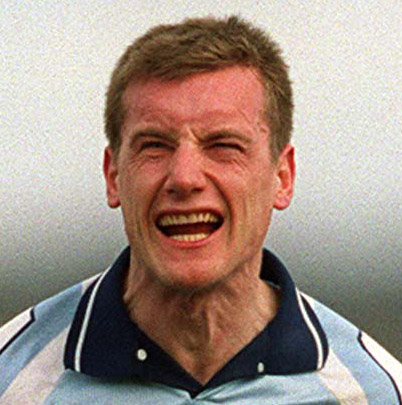 Ballymena United's all time record transfer signing who single handedly saved the club from relegation before leaving under a cloud in 2001.

Hunter began his career with his hometown club, Distillery, joining the Whites in December 1984 from Lisburn United as a fresh faced 17-year-old. Hunter featured mainly for the second string at New Grosvenor Park, before finally being afforded a senior Irish League debut in September 1987.

Crusaders manager Roy Walker snapped up the young striker in July 1989 and Glenn finished as top goalscorer at Seaview during his first season (1989/90) with 12 goals in 29 appearances for the Crues as the North Belfast side only avoided the embarassment of re-election by virtue of goal difference over his former side - Distillery. The following season the fledgling striker came of age with a return of 31 goals in all competitions, firmly establishing Glenn as one of the top forwards in Irish League football - despite Crusaders finishing in mid-table during the 1990/91 campaign.

His goals impressed Linfield manager Eric Bowyer, who brought Glenn across Belfast to Windsor Park in April 1991 to reignite his struggling front-line. Glenn's first full season in South Belfast proved to have plenty of up's and downs - as he was on the losing side for his first senior cup final with Omagh Town defeating the Blues in the Floodlit Cup final in December 1991. Despite only finishing third in the Irish League, Linfield bounced back to win the League Cup with a 3-0 win over Larne at the Oval in April 1992, with Glenn scoring the third and final goal for his first Irish League winners' medal. That joy was short lived as he came off the bench in the 1992 Irish Cup final defeat to Glenavon the following month, drawing to a close a season that returned 14 goals in 46 appearances (almost half those games coming as a substitute).

The 1992/93 started in fine fashion, as Linfield and Hunter lifted the Ulster Cup in September 1992 after a 2-0 win against Ards at The Oval. Despite the departure of manager Eric Bowyer in October 1992 and the arrival of Trevor Anderson, the 26-year-old forward missed a large chunk of the season as Linfield clinched a dramatic 41st Irish League title. It would be the last act of his career in a blue shirt, as he would leave the club in the summer of 1993 after 74 appearances and 27 goals.

Hunter's next move was back to his old stomping ground, Seaview - as Roy Walker had started to build the blocks of a potential Crusaders title winning team. The striker's return to North Belfast after two years was virtually seemless as he scored the only goal in the Ulster Cup final against Bangor in October 1993. There was disappointment as the Crues lost in the County Antrim Shield showpiece to Ards, but a fourth place finish and 28 goals was a job well done for Glenn - who also competed in Europe for the first time as the Crues held their own against Swiss side Servette in the UEFA Cup.

It all fell into place for Walker and Crusaders in 1995 as the North Belfast club won their first Irish League title for 20 years, with Hunter and new strike partner Stephen Baxter (signed from Distillery) the catalyst to the success with 45 goals between them in all competitions. Ironically, the title was confirmed on 1 April 1995 at the Ballymena Showgrounds - as Hunter's bullet header sealed a 2-0 victory over the Sky Blues.

Glenn Hunter started the 1995/1996 season by scoring the Crues' first goal in Europe for 27 years against Danish side Silkeborg in the UEFA Cup, but despite victory in the Gold Cup in February 1996 over Linfield - it was a second of second best for Crusaders in the defence of their league title. Walker's men finished runners-up to Portadown in the league and were beaten finalists in both the League Cup (to Portadown) and the County Antrim Shield (to Glenavon).

In December 2003, Glenn announced his retirement aged 36, after being plagued by injuries and limited to only two substitute appearances for the Whites in his final season (2003/2004).

Upon his retirement, Hunter was inducted into the Crusaders Hall of Fame in 2007.