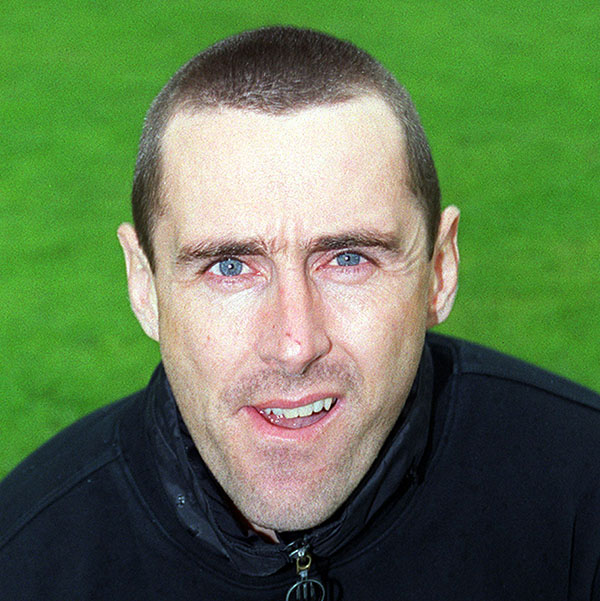 An experienced and well traveled goalkeeper from Waterford who was Kenny Shiels first recruits in the unsuccessful bid to avoid relegation in 2001.

Started out as 16-year-old at Coventry City

A move across the world for the 1992/1993 season as, he signed for Hong Kong based side Ernest Borel as the club finished as finalists in the Hong Kong FA Cup. Dalton was due to return to Hong Kong, but answered the call of Coventry manager Bobby Gould to provide short term cover for the Sky Blues as he was named on the bench for the stunning opening day victory over Arsenal at Highbury in August 1993.

In September 1993, it was Nigel Best who brought Dalton back to Ireland signing for Bangor on a short term deal on the recommendation of former Derry City team-mate Ray McGuinness, this eventually turned into a three-year professional contract. Despite slotting straight into the team, Tim was on the wrong end of a trio of cup final defeats during the 1993/1994 season; firstly losing the Ulster Cup final to Crusaders (thanks to a solitary Glenn Hunter goal) in September, a month later it was Distillery who overturned Bangor in the Gold Cup. The most painful was an Irish Cup final defeat to Linfield in May 1994, losing 2-0 in front of 15,000 fans at the Oval.

The 1994/1995 season was a rollercoaster for both Dalton and Bangor, the former missed out on an Ulster Cup winners' medal following victory over Linfield in September 1994 - but then seen manager Best depart to Glenavon mid-season, to be replaced by player-boss Roddy Collins. The new manager, guided the Seasiders to a place in the new Premier Division for the 1995/1996 season by the skin of their teeth, in the bizarre scenario whereby losing their last game to rivals Ards was more beneficial than winning. Tim also earned an Irish League representative cap in March 1995 against the League of Ireland, coming on as a substitute for Crusaders' keeper Kevin McKeown.

Following the departure of many of his Bangor team-mates, Ronnie McFall brought the goalkeeper to title-chasing Portadown in the summer of 1995 and it was a move that paid dividends almost immediately. The County Armagh side romped home to win the 1995/1996 Irish League (in the first year of the Premier Division), beating defending Champions Crusaders to the chase. Dalton picked up a League Cup winners' medal (as an unused substitute) in September 1995 before displacing the veteran Mickey Keenan to earn an Ulster Cup winners' medal following in January 1996, following victory over Linfield on penalties.

The Ports failed to follow up their Gibson Cup success as results began to wain in the late nineties, they finished fourth in 1996/1997 and third in the 1997/1998 campaign, there was only a Mid-Ulster Cup win to show for their spoils over two seasons, narrowly defeating Dungannon Swifts on penalties in March 1998.

The disappointment of defeat in the Gold Cup final to Glentoran and an eighth place finish (and narrow avoidance of the relegation playoff) was bizarrely rectified by winning the Irish Cup... by default! Having qualified for the 1999 showpiece after defeating Alan Fraser's Ballymena United side in the semi-final - the late discovery of Simon Gribben's ineligibility for final opponents Cliftonville, heralded the removal of the Solitude Reds from the competition and a winners' medal without kicking (or catching!) a ball for Dalton and his Portadown team-mates.

The Cliftonville saga meant both a return to Europe for Portadown (losing comfortably to CSKA Sofia of Bulgaria) and a place in the Charity Shield season opener, which the Ports won 2-1 against Glentoran at Mourneview Park. The following year, Tim returned to the Irish Cup final and although this final was actually played, Ian Gilzean's header was enough to hand the first Irish Cup of the new millennium to Glentoran. The poor start to the 2000/2001 season was to mark the end of the goalkeeper's time at Shamrock Park. The Waterford born stopper accused McFall of making him the scapegoat for the team's poor league position (Portadown eventually finished eight) and a subsequent bust up with the manager, left Tim out the door in December 2000 and wasn't to return.

Kenny Shiels' arrival at the Ballymena Showgrounds in January 2001 paved the way for the exiled goalkeeper to be his first signing on a free transfer at the Braid, with the number one jersey being a problem area for the relegation strugglers - as he became the FIFTH different 'keeper used. The 35-year-old added a wealth of experience to a youthful team, but with 15 appearances in the second half of the 2000/2001 season it wasn't enough to save Ballymena United from relegation on the final day of the season to Tim's former employers, Portadown.

Dalton's time at the Showgrounds was firmly brought to an end with the shock arrival of Northern Ireland goalkeeper Tommy Wright, who was acquired to spearhead the Sky Blues' promotion charge. In September 2001, he dropped down to the Second Division (third tier) to turn out for Dundela under Mervyn Bell.

Dalton returned for his swansong in senior Irish League football in March 2002, signing for First Division Institute for the season run-in, as they finished ahead of promotion favourites Ballymena United to clinch a place in the top division for the first time in the North West club's history! In May 2002, 36-year-old Dalton final move of his career to Longford Town but failed to make a single appearance for the Leinster club, as he found himself providing cover for the regular goalkeepers in a shorter season, before the League of Ireland's transition into summer football in 2003. The veteran goalkeeper retired at the end of the 2002/2003 season.