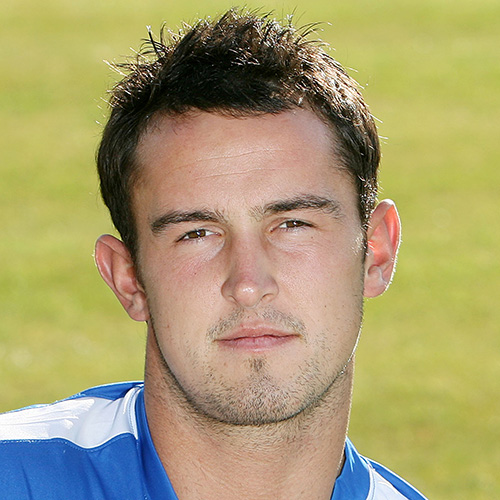 Young Belfast born forward who was brought into the team by Nigel Best, best remembered for scoring his only United goal from the half-way line against Cliftonville!

Anderson joined the Sky Blues as a teenager in July 2000, and was quickly elevated into Best's cash-strapped and struggling United outfit in September 2000 for a senior debut in a 1-0 win over Newry Town at the Showgrounds. It was the first of 13 appearances during the 2000/2001 season, with the highlight being the stunning strike against Cliftonville in December.

Chances were limited for Tony under new boss Kenny Shiels, who replaced Best in January 2001 - eventually seeing the Sky Blues relegated to the First Division. Anderson did also appear for Joe McCall's Ballymena United Reserves team which lost in the final of the George Wilson Cup to Glentoran II in November 2000.

In the summer of 2001, the forward took up an offer of a football scholarship in the United States. It wasn't until December 2006 that he returned to the Irish League, signing a deal with Larne under Paul Curran. It was a turbulent six months with the Invermen as they escaped relegation to the First Division by the skin of their teeth following the appeal of a 12 point deduction for playing an ineligible player, eventually ending the 2006/2007 season in 14th place, one point above the relegation zone.

His Larne spell was enough to impress Newry City manager Gerry Flynn, who signed the now 24-year-old to the border club in June 2007.

Following his release from Newry in the summer of 2009, he was snapped up by new Lisburn Distillery manager Jimmy Brown in August 2009.

Anderson re-appeared in the Irish League in January 2011, answering the call from Carrick Rangers manager Stephen Small to aid their promotion push from the Championship back to the top flight. It proved a memorable spell for the East Antrim side as they secured a memorable league and couple double on the same night! Tony started in the Intermediate Cup final win in May 2011, whilst at the same time results went in Carrick's favour to secure the league title and promotion back to the top division for the first time since 1995.

Life was a struggle for Rangers in the Premiership during their first season back.