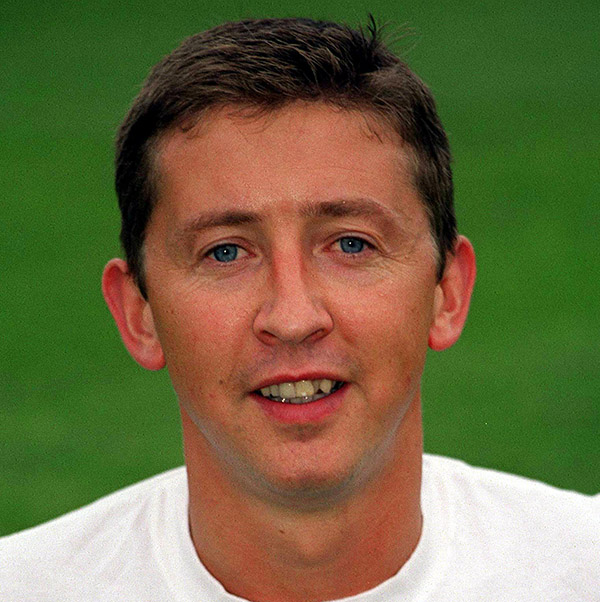 Went to Sweden after being offered choice of Hong Kong or Sweden. Norman Kelly also at OLdham went out and signed for rivals.

20-year-old Allen went straight into the Linfield team and retained his place for the remainder of a disappointing 1990/1991 season which seen the Blues eventually finish seventh in the table and trophyless. Despite his personal progression at the Blues, Allen was hit with a double blow of losing his first final in December 1991, in the Floodlit Cup to Omagh Town. Then two weeks later, his season was brought to a premature end with a collapsed lung on Boxing Day against Glentoran.

Jason returned for the start of the season but getting back into the Linfield team would prove difficult in the 1992/1993 season as Trevor Anderson replaced Bowyer in October 1992 and South Belfast men went onto win both the Irish League and the Ulster Cup without the defender, who only made eight senior appearances that season.

In a similar vein the 1993/1994 season was one on the sidelines with less appearances and more trophies as the Blues added the Irish Cup, League Cup and Floodlit Cup to a second successive League Championship. It was a first foray into European Football as he was an unused substitute in Linfield's four Champions League games against Dinamo Tblisi and FC Copenhagen, the latter in which his team-mates surrendered a 3-0 home lead to miss out on a second round tie against AC Milan.

Jason forced his way back into Anderson's team during the second half of the 1994/1995 season and picked up his first senior winner's medal from the bench in the County Antrim Shield win against Glenavon in January 1995. His season ended in disappointment as he was left out of the squad for the Irish Cup final against Carrick Rangers despite featuring in almost every round in the lead up to the final.

Following the Irish Cup final he left Windsor Park after 92 appearances and 1 goal in five seasons. He joined fellow Linfield fringe players John McConnell and Nigel Boyd to Ballymena United in June 1995. Despite missing out on promotion to a rampant Coleraine side, Jason became an instant hit with the Braid fans for his assured performances in the centre of the Ballymena defence, as he swept the board at the 1995/1996 end of season awards.

Alan Fraser's United made no mistake on securing the First Division title in 1996/1997, with 27-year-old Allen in his prime in this successful team. The Sky Blues narrowly missed out on a 'double' as they lost out to Cliftonville on penalties in the County Antrim Shield final in February 1997.

Allen and his team-mates took to the Premier Division like ducks to water during the 1997/1998, with the Sky Blues surprise league leaders at Christmas, but they couldn't keep up the momentum in the second half of the season - eventually finishing fifth and losing in the final of the Irish News Cup to Omagh Town. The following season, defeat in the Irish Cup semi-final to Portadown in April 1999, saw to the end of Fraser's reign at the Showgrounds.

Nigel Best was appointed to the Showgrounds hotseat but couldn't halt the Sky Blues' alarming demise, as United avoided relegation on the final day of the 1999/2000 season by the skin of their teeth. It was only a short reprieve as further cost cutting left Allen as one of the few experienced players in a youthful Ballymena team. Best lasted until December 2000, but his replacement Kenny Shiels couldn't prevent relegation back to the First Division, despite a late rally.

Brought to tears by relegation, Jason Allen left the Showgrounds following relegation with 241 appearances, x goals and the respect of the United faithful as a loyal servant who was a fans favourite throughout six seasons at Warden Street.

Persuaded not to retire by Crusaders boss Gary McCartney, the 30-year-old joined Crusaders in July 2001 to remain in the Premier Division, but his stay at Seaview lasted only until October 2001 as he walked away from the game. Later that same season Jason signed for Harland & Wolff Welders in February 2002 and was part of the team which won Smirnoff Cup beating Banbridge Town in May 2002.

From almost walking away from the game altogether, the rejuvenated Allen spent a further four full seasons at Tillysburn Park as the Welders established themselves as one of the top sides outside of the senior divisions, finishing as runners-up in the Second Division in 2002/2003 and winning the Intermediate Cup in the same season.

Jason made the move across to First Division rivals Bangor in October 2006, but spent only season with the Seasiders, as they narrow missed out on Premier Division promotion in the playoffs to Glenavon. The big defender finished his career with Knockbreda, joining in October 2007 for the remainder of the 2007/2008 campaign before hanging up his boots.