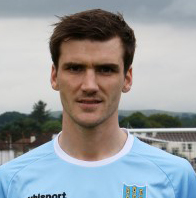 Central midfielder plucked from the lower leagues by Roy Walker and went onto have eight seasons at the Showgrounds!

Born in West Belfast, Gavin took an opportunity to move to England in 2000 as a 16-year-old with Peterborough United signing a two year apprenticeship with the London Road club. However, the dream of professional football didnât come true for the young midfielder who returned home in 2002 disillusioned with football after failing to make the grade like so many young players at his age.

So disillusioned in fact, Taggart turned his back on football during his late teens and early twenties before returning to the pitch with Newington YC (then of the Amateur League). Within a couple of years, Taggart was quickly pulling the strings in midfield as Newington went on to win the Northern Amateur League in 2008/09. His performances also merited International recognition via Harry McConkeyâs Regions Cup competition team, with Gavin starring for the Junior International team in March 2009 in Germany.

Suddenly by the summer of 2009, the 24 year old was hot property â attracting interest from his boyhood team Cliftonville and Crusaders amongst others. But it was Ballymena United manager Roy Walker who convinced him to join his Sky Blue revolution in May 2009 and made his debut against the Reds on the opening day of the 2009/2010 campaign. After a period of adjustment in the first half of the season, Gavin was quickly established as a regular in Walkerâs team that reached the Irish Cup semi-finals in April 2010, losing on penalties to Portadown.

Despite always promising much more, Walkerâs Ballymena United continued to struggle at the wrong half of the league table. Personally, Gavin had adapted to the rigours of top division football well despite regular run-ins with the local referees! His 2010/2011 season was cut short by a severe broken wrist suffered at Donegal Celticâs ground. Walkerâs continued struggles came to a head in December 2011 following his resignation, the appointment of Glenn Ferguson revitalised Gavin â who had spent the first half of the 2011/2012 on the fringes of the United first-team.

Ferguson found a reliable workhorse in his inherited midfielder and faith was repaid with a stunning County Antrim Shield final victory over Linfield in November 2012 â Unitedâs first trophy in 23 years. However, league form continued to escape the Sky Blues who still were under pressure to break into the top six as Gavin marked a century of appearances for Ballymena United during the season and was rewarded with a new two year contract as apparent interest from both Portadown and Glentoran had forced the club to tie down a key asset.

Taggart came off the bench during the disappointing 2014 Irish Cup final defeat to Glenavon. But his loserâs medal paled in comparison to the sudden collapsed lung suffered in November 2014 which ruled the combative midfielder out for the remainder of the 2014/2015 season which included missing out on the League Cup final to Cliftonville in January 2015.

Thankfully there was a full recovery from surgery of the collapsed lung, but niggling injuries continued to hamper Taggartâs attempts to maintain a run in the side throughout the 2015/2016 season. A return to fitness at the turn of the year allowed Ferguson to select the 31-year-old for another County Antrim Shield final victory in January 2016 over Linfield.

David Jeffrey replaced Ferguson a few months after the Shield final victory, Gavin began his eighth season out of favour at the Showgrounds but after forcing his way into back into the team unfortunately yet again his season was abruptly ended in January 2017, this time through a badly dislocated shoulder at Windsor Park against Linfield, which ultimately meant missing out on the League Cup final victory over Carrick the following month.