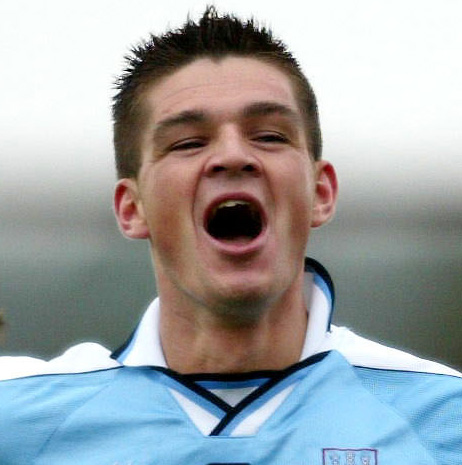 One of the hottest properties in Irish League football at a time when defender turned striker Shea Campbell scored 38 goals in a single season for the Sky Blues!

Having grown up quickly being in and around the team at hometown club Armagh City, his opportunity came in the 1999/2000 season at First Division side Dungannon Swifts as the 18-year-old broke into the first team as a right-back at Stangmore Park and never looked back from then.

In January 2001, new Ballymena United manager Kenny Shiels moved to make 19-year-old Campbell one of his first major signings - prising the teenager away from the Swifts for just a reported Â£800. In the midst of a desolate relegation battle, Shea made his United debut in the 1-0 defeat to Newry Town that month - and despite impressing at full-back and further forward in midfield scoring 3 goals in 12 appearances, the Sky Blues suffered relegation on the final day of the 2000/2001 season.

Campbell was one of only a handful of first-team players that remained at the club during a summer of flux at the Showgrounds ahead of the 2001/2002 First Division campaign. Despite Shiels' side failing to live up to their billing as promotion favourites to eventually enduring a fifth place finish in the table (the club's lowest ever league placing) - Campbell came of age as a striker under the tutelage of his partnership with veteran signing Peter Withnell. Campbell scored 13 goals in all competitions.

The standout season came in the 2002/2003 First Division in which Ballymena United needed to gain promotion or potentially lose their senior status for the first time in the history of the club. Shiels reinforced his youthful side and it was the goals of the mercurial Campbell which were the standout feature of his swashbuckling side. Shea bagged 38 goals that season (including four hat-tricks) but United failed to bag any silverware, finishing runners-up in both the league and the Ulster Cup whilst narrowly losing to Glentoran in the semi-finals of the League Cup and the final of the County Antrim Shield.

The Armagh hotshot was the talk of the Irish League in January with interest from professional clubs including Oldham Athletic coming to light with his contract up at the end of the season. Following a dramatic Irish Cup equaliser against reigning Champions Portadown - Campbell signed a new bumper deal to stay at the Showgrounds and eventually was called into the Northern Ireland Under-21 squad against Spain in April 2003. As well as finishing as the top goalscorer in the First Division, Shea was awarded the First Division Player of the Year in 2003 by the NI Football Writers' Association.

Speculation continued into the summer as Campbell spent time on trial at Colchester United and then starred for the Sky Blues in Mark Carlisle's testimonial match against Heart of Midlothian, scoring twice. It took a while to adjust to life in the Premier Division for both Campbell and United, niggling injuries and loss of form disrupted the early part of the season. Both parties burst to life post-January as United secured a top-six finish to qualify for Europe for the first time since 1989 - as Shea once again finished top goalscorer in 2003/2004 (with 14 goals) despite a fractious relationship with new marquee strike partner Nigel Jemson.

The 2004/2005 season started with much promise as United aspired to move to the next level - Campbell starred in his Euro debut as Ballymena United secured their first away result in the club's European history - drawing 0-0 with Danish side OB Odense in the Intertoto Cup before exiting the competition the following week. But with Rory Hamill recruited from Coleraine and having fallen out of favour with manager Shiels - Shea was frozen out of action during the early part of the domestic season.

The shock announcement in late October 2004 that Campbell would be moving to Armagh City in the First Division spelt an unceremonious end to his time at the Showgrounds having scored 69 goals in 141 games. The striker rediscovered his form at Holm Park during his short-spell at his hometown club as the Eagles would eventually go onto win the First Division unbeaten during the 2004/2005 campaign.

When the transfer window opened in January 2005, Linfield boss David Jeffrey swooped to sign the striker in a free transfer move on an 18 month contract. The spell at Linfield proved short and unspectacular with only one goal in 14 appearances during the second half of the 2004/2005 season. Shea claimed his first senior medal, winning the County Antrim Shield as a substitute in the extra-time victory over Crusaders but was left out of the squad for the club's historic Setanta All-Ireland Cup final win over Shelbourne in May as the Blues also finished runners-up to Glentoran in the league. The striker agreed to mutually terminate the contract in July 2005 to allow him to pursue first team football.

Despite a trial period at Newry City, Campbell opted to join newly promoted Glenavon in August 2005. He failed to rediscover his form with only 5 goals in 20 appearances for Jimmy Brown's side and was quickly on the move again come the next transfer window after being granted his release by mutual consent to link up once again with Armagh City for the second half of their first ever top-flight campaign in January 2006 under Colin Malone. Shea's goals helped his hometown team narrowly avoid relegation, finishing 14th (from 16) in the 2005/2006 campaign. He returned to his best form during the following season at Holm Park, hitting double figures in the goal charts for the first time since 2004 and was one of the first names on Gary McKinstry's team-sheet as the Eagles finished 11th in the Premier League - still the club's highest ever top flight position.

After 18 months at Holm Park, and his stock rising once again Campbell was lured across Mid-Ulster to neighbours Dungannon Swifts on a two year pre-contract deal announced in April 2007 for the forthcoming season. Now aged 26, Shea made 25 appearances and scored 5 goals for the Swifts during the first half of the 2007/2008 season.

Back on loan to Armagh City

Marty Quinn brings Shea back to Glenavon in August 2009 as a full-back.