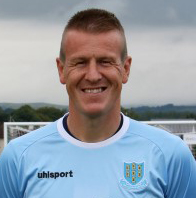 Scottish midfielder signed by Roy Walker in 2011 who become a hugely popular and successful player with the Sky Blues.

Jenkinsâ introduction to senior football was with his hometown team, Stranraer, in September 1998. However, the 17-year-oldâs debut came as a substitute came in a disappointing 7-1 derby defeat to Ayr United. It would be a tough first season for the teenager, who was helpless to his sideâs relegation from the Scottish First Division at the end of the 1998/1999 season. For the next few season under Billy McLaren, young Allan became a regular figure in the midfield of the Stair Park side as they plodded along in the mid-table positions of the Second Division (third-tier) before succumbing to relegation again at the end of the 2002/2003 season.

The appointment of Neil Watt as manager proved an instant hit in 2003 as with 23-year-old Jenkins appointed as club captain, they secured back-to-back promotions; firstly winning the Third Division title at the first attempt (in 2003/2004) and then gaining promotion back to the second-tier after finishing as runners-up in 2005/2006. His sparkling form attracted the interest of the free-spending border side Gretna, who were on a relentless upward trajectory funded by the millions of Brooks Mileson, Jenkins joined Gretna in January 2006 for an undisclosed fee after almost 250 appearances for his local team.

Under Rowan Alexander, Gretna cantered to the Second Division title in 2005/2006 and came within a whisker of shocking Scottish football as they lost the Scottish Cup final on penalties to Hearts. Allan was cup tied for the Scottish Cup final but was part of the clubâs subsequent historic first venture into European football as they were soundly defeated by Derry City in the second qualifying round of the UEFA Cup in August 2006. Undeterred, Jenks and his team-mates went onto win the Scottish First Division title and promotion to the Scottish Premier League.

Having reached the promised land of the top flight, financial problems mounted following Milesonâs withdrawal of funding due to ill-health. Allan signed for First Division Greenock Morton in January 2008 as Gretna sadly finished bottom of the league and went out of business at the end of the 2007/2008 season. Allan was re-united with his former Gretna boss Davie Irons a few weeks later, and the pair helped guide Morton away from relegation. Allan stayed for a further three seasons at Cappielow Park, finding his best form in the final third campaign (2010/2011) where he finally shook off a number of niggling injuries to hit double figures of goals for the first season in his career.

It was through long time friend and fellow Stranraer native Gary McCutcheon, that Jenkins made a shock move across the Irish Sea in May 2011. The 29-year-old turned his back on full-time football to sign for Roy Walkerâs Ballymena United and was immediately appointed captain of the new look team ahead of the 2011/2012 season. Commuting from his native land on match-days and training with Stranraer during the week, the Scot proved an immediate hit with the fans for his industrious midfield displays, but this was amidst a poor run of form which lead to the resignation of Walker in December 2011. Glenn Ferguson came in and continued to build his team around his captain, as the Sky Blues ended a 23-year trophy famine by returning from injury in time to come off the bench and score a penalty in the shootout as the Sky Blues won the County Antrim Shield against Linfield in November 2012.

A trusted professional, the manager even deployed him as a central defender and as a target man up front in times of need. Whilst Fergusonâs United couldnât find any consistency in the league, the side became cup specialists as they reached the finals of the Irish Cup in 2014 (in which Allan scored) and the League Cup in 2015, both of which the Sky Blues lost to Glenavon and Cliftonville respectively. In January 2016, the Sky Blues again won the County Antrim Shield against Linfield on their own turf but it wasnât enough to save Fergusonâs job as he was sacked and replaced by David Jeffrey in March 2016.

The 2016 season was frustrating for the now 35-year-old as with an uncharacteristic dip in form, he found himself in the unfamiliar place of the bench for spells during the season. However, always a player for the big occasion â Allan scored the opening goal in the memorable League Cup final victory over Carrick Rangers at Seaview in February 2017, to win the competition for the first time in the clubâs history and put Jenks into a very select category of Ballymena United players to have won three or more winnersâ medals whilst at the club.

Allan had also started on the coaching road, having been appointed as a community coach in Stranraer, he also took up a role alongside former Sky Blues forward Gary McCutcheon as coach of the Stranraer Under-17 team. He subsequently was appointed Head of Youth Development at his hometown club.

In May 2017, Allan took the difficult decision to reject the offer of a new one-year contract at the club, ending his memorable six year association with the Braidmen to spend more time closer to his family. Upon his decision he revealed 'I am absolutely gutted to have to come to this decision, it has been a tough time, but I spoke to my dad and he said that if this is the time to bow out, then to have done it with my last goal in the League Cup Final and my last appearance in the biggest game we have played in years, then maybe it's right.'