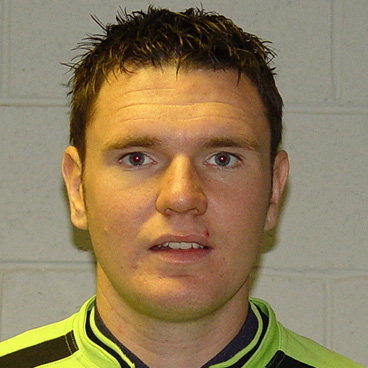 Southern goalkeeper who spent two full seasons as Tommy Wrightâs number one at the Showgrounds, but ultimately lived a nomadic footballing career across Ireland.

Haling from Dundalk, Paul began his career as an trainee at Leeds United, famed for their production of young Irish players, under the leadership of then Elland Road boss David O'Leary at the turn of the millennium. However, following two yearsâ apprenticeship in Yorkshire, he moved to Leicester City, aged seventeen on a two year professional contract.

Murphy made steady progress during his time at Foxes, with Leicester under the management of Micky Adams. After impressing in the reserves, he worked his way up to third choice goalkeeper behind England international Ian Walker and Danny Coyne. Despite failing to break into the first team, he gained International recognition as for the Republic of Irelandâs Under-19 side, winning a number of caps at that level, and also played in a record 10-1 victory over San Marino.

Despite this though, City's relegation to the English Championship meant major cost cutting at the club and alongside thirteen other professionals at the club, Murphy wasn't offered a new deal when his contract ran out.

In August 2004, Murphy returned back home to Ireland and signed for his home town club on transfer deadline day for the League of Ireland side, now managed by Jim Gannon. However, Murphy couldn't help the 'Lilywhites' of Dundalk finish any higher sixth in the Eircom League First Division in the 2004 season as he made only two appearances for the club.

With the League of Ireland finishing in November, Newry City manager, Roy McCreadie, began a raid on players from South of the border in an attempt to boost his failing Newry side. Murphy joined McCreadie at the Marshes in early December but was unable to play for the border side until the transfer window re-opened the following month. After patiently waiting, Paul made his Newry debut against Linfield at Windsor Park on the 22nd January, but his mistake cost his team the decisive goal, when Shea Campbell (who had just joined Linfield from Ballymena) scored the second goal in Linfield's 2-0 win.

That was Murphy's only league appearance in Newry colours as on the eve of the January transfer-window closing; Ronnie McFall came in looking for cover for injured goalkeeper David Miskelly at Portadown. He was signed until the end of the 2004/2005 season and was to make a dramatic impact in his first season at Portadown as he impressed many with stellar performances in both the Irish League and Setanta Cup. However, it was in the Irish Cup which the 20-year-old stopper will be mostly fondly remembered, as he picked up his first senior medal in the 5-1 final victory over Larne at Windsor Parkin May 2005.

There was no hesitation in offering Murphy a new one year deal Shamrock Park. However, the 2005/2006 campaign proved tougher for both Portadown and the goalkeeper himself, as they both struggled to find consistent form as Murphy found himself back behind David Miskelly in the pecking order. Portadown finished lethargically in third behind a rampant Linfield side, with limited opportunities during the season for Paul, he left the club in May 2005, as the Ports had already brought Distillery goalkeeper Michael Dougherty to compete for the goalkeeperâs jersey.

Paul didnât have to wait long to get sorted as he was unveiled as a Ballymena United player in June 2006. Having beaten a number of clubs to his signature Tommy Wright immediately installed the man as his first choice, replacing William McFrederick. Murphy was a virtual ever present for the Sky Blues for the next two seasons, as Wrightâs Ballymena overcame an inconsistent 2006/2007 season to be challenging at the top end of the Irish League for most of the following season, going 14 games unbeaten in the process â he had kept 22 clean sheets in 79 appearances for the Braidmen.

Following Wrightâs surprise resignation at Warden Street on the final day of the season and the subsequent appointment of Roy Walker, Murphy was one of the first to leave the club, having sensed that the writing was on the wall with the pre-contract signing of Northern Ireland international Alan Blayney, he returned to Newry City in June 2008.

Murphy started the newly restructured IFA Premiership season as first choice under Gerry Flynn, but inconsistent performances meant that he fell behind Andy Coleman in the pecking order at the Newry Showgrounds which cost him a starting place for the League Cup final against Portadown in March 2009. The goalkeeper would gain some cup glory as he was permitted to make an emergency loan to Cliftonville the following month for their memorable Irish Cup semi-final victory over Linfield.

Another short loan spell followed in the summer of 2009 as Lisburn Distillery required cover for the injured Phil Matthews. Manager Jimmy Brown threw Murphy into the mix for Europa League games against Georgian side Zestafoni as the Whites were soundly beaten over two legs. Following a handful of domestic appearances at the start of the 2009/2010 season he returned to Newry City, where he found himself frozen out of the team.

Having been granted a free transfer, in February 2010 there was a return to the League of Ireland with Drogheda United. With the club in turmoil on and off the pitch it didnât make for a enjoyable stay at the Drogs as Paul quickly made a mid-season move across Louth back to Dundalk in August as cover for Peter Cherrie. His second spell at Oriel Park was spent on the sidelines, including as a runner-up in the Setanta Cup in 2011.

Paul returned North and signed a short term deal with struggling Carrick Rangers in January 2012, joining an influx of Southern players to Michael Hughesâ team but couldnât prevent relegation back to the Championship after just one season back in the top flight. This marked the end of Paulâs stay in senior football at the age of just 27.