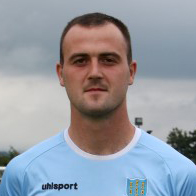 Dominating centre-half plucked from Knockbreda by David Jeffrey in the summer of 2016 for a second bite at top-flight football.

Owensâ football career was carved up at the youth ranks of Crusaders alongside older brother, Jordan. Whilst his sibling quickly became the focal point of Stephen Baxter regular trophy winning attack and earning caps for Northern Ireland, Kyle was having greater difficulty breaking into the Seaview starting eleven.

He made his competitive debut during the 2010/2011 season as an eighteen year old in the heart of the Cruesâ defence and managed a handful of appearances in which the teenagers performances impressed many onlookers that another star had been unearthed on the Shore Road.

The following season after struggling to force his way past the irrepressible duo of Colin Coates and David Magowan, the big defender took the opportunity to get first team experience at struggling Premiership newcomers Carrick Rangers under the tutiledge of former Northern Ireland international, Michael Hughes. Owens joined on loan in January 2012 (with Carrick Rangers playing âhomeâ games as the familiar surroundings of Seaview) but could not prevent a slide straight back to the Championship, following a bottom place finish during the 2011/2012 campaign.

Undeterred, Kyle threw his lot in with Carrick Rangers for the following campaign back in the Championship, signing a permanent deal with the East Antrim side in May 2012. Despite a stunning start to the season under Hughes for the Amber Army the defender was on the move again in January 2013, moving back to Belfast with Dundela.

It was a moved that proved worthwhile, as the Mark Snoddenâs side finished the 2012/2013 season above Carrick Rangers in the Championship 1 table, to finish fourth and then he picked up his first winnersâ medal after winning the 2013/2014 Steel and Sons Cup following a 4-1 win over Immaculata. Two years at Wilgar Park ended abruptly as Owens was persuaded to move to Championship 1 neighbours, Knockbreda, by manager Raymond Bell in January 2015 with the Duns struggling in the league.

Having now firmly established himself as one of the top defenders outside of the NIFL Premiership, Kyle continue to shine at Knockbreda as they finished the 2015/2016 in their highest ever league placing of fourth in the second tier. Owensâ form alerted Ballymena United manager David Jeffrey, who moved swiftly in May 2016 to sign the now 24-year-old in an attempt to make inroads on his inherited leaky defence at the Showgrounds.

Despite a nightmare debut in August 2016 in a 6-0 defeat to Crusaders, Owens quickly would plaudits from United fans for his wholehearted displays and also managed two goals on his home debut against Glenavon. During a memorable 2016/2017, he also claimed his first senior winnersâ medal, as part of the Ballymena United team that defeated his former side Carrick Rangers in the NI League Cup final in February 2017.