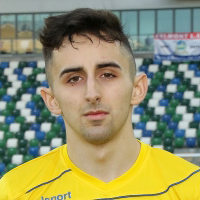 Teenage full-back was quickly evaluated to David Jeffreyâs first team in November 2016 and never looked back!

Adam emerged from progressing through the youth teams at Crusaders and starred in the 2015 Milk Cup for County Antrim who became the first regional side to win the competition as they lifted the Under-17 Premier section title at the Ballymena Showgrounds, in a team that included Matthew Shevlin.

In August 2015, Ballymena United Thirds manager Clifford Adams brought the 16-year-old full back to the Showgrounds and the youngster quickly blossomed at the Braid, appearing for the Reserves as well as playing a key role in the clubâs progression to the prestigious Harry Cavan IFA Youth Cup final, after being awarded as the man of the match in the semi-final. The final proved one step too far for McCracken and his team-mates as they lost 4-1 to Crusaders Colts at Mill Meadow.

McCracken started the 2016/2017 season as part of Paul Harbinsonâs newly rebranded Under-20 Development squad at the Showgrounds and some stellar performances beyond the maturity of his years followed. This lead to a shock call-up to the United first-team for a starting debut in the league visit to Cliftonville just five days after his eighteenth birthday. The youngster held his place at full-back throughout the winter of 2016, starring in two memorable home victories over Coleraine in both the League Cup semi-final and on Boxing Day.

In February 2017, Adam won his first senior domestic medal as he was an unused substitute in the NI League Cup final victory over Carrick Rangers.