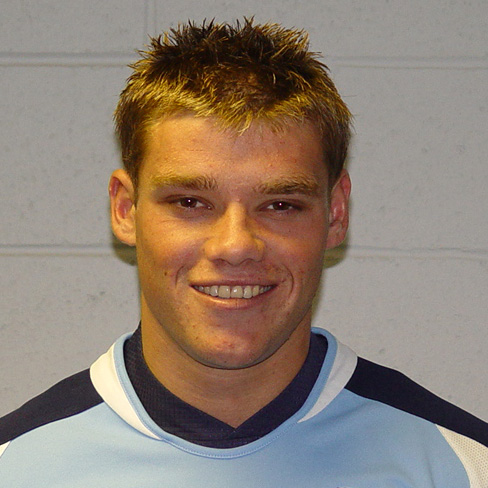 One of the most popular strikers of his era, Scottish forward Kevin Kelbie consistently scored goals for the Sky Blues over five years at the Showgrounds.

Born in Stirling, Kevin was spotted playing for his local youth team when he was signed by Glasgow Celtic as a schoolboy. Kevin spent nearly three years at the under-age teams of Parkhead. During the summer of 2002, he made a bold move after not being kept on by Celtic - by signing for Rangers! However his time in the youth team at Ibrox wasn't long spent before he was on the move again. In November 2002, he moved to Scottish First Division side, Alloa Athletic, then managed by Terry Christie.

Kevin had to wait until the following 2003/2004 season to make his senior debut at Recreation Park eventually making his bow in the opening game of the season against Clyde - starting in a 2-1 defeat in the Challenge Cup. The 18-year-old would make eight more first team appearances that season, all from the substituteâs bench. With slow progression at Alloa, Kevin decided to take a year out to move across the pond to the United States. He spent a season with Northern Oklahoma College in 2004.

In July 2005, Kevin moved to Northern Ireland to work and live with relatives after returning from America. Glentoran manager, Roy Coyle, was soon alerted and after impressing despite playing out of position on the left side of midfield in pre-season and earned a one-year contract at the Oval. Kevin initially struggled to make an impression in the early domestic games of the 2005/06 season - Glentoran accepted Ballymena United's offer to take the 20-year-old Scot to Warden Street in August 2005.

Kelbie made his Ballymena United debut away to Newry City in late August; and the following week he scored the winner in his full debut against Glenavon at Mourneview Park. However he was to struggle in his first few months at the Showgrounds. Niggling injuries and a uncovering a diagnosis of diabetes turned his form around as modified diet and training produced a revitalised striker in December 2005, as he came off the bench to score a dramatic last minute winner at the Oval against his former employers - Glentoran.

The goals just didn't stop flowing as Kelbie racked up 16 goals in little over half a season at the Braid - including a fantastic strike in the County Antrim Shield final defeatl against Linfield. His great form was rewarded with a new two-year contract at Ballymena and he even had Northern Ireland Under-21 manager, Roy Millar, checking his eligibility to transfer his allegiance to his new residence.

Kelbie had quickly become the talisman of Tommy Wrightâs team and finished as top scorer in each of his first three seasons. However, Kevin dropped a bombshell on the club early in 2007 when he declared his intention to move back home to Scotland after suffering from homesickness. Thankfully, an arrangement was made to fly United's key asset over for games and whilst in Scotland he would train with his hometown club - Stirling Albion.

The chaotic summer of 2008 seen Wright resign to be replaced by Roy Walker, the former Crusaders managerâs first task was to fend off interest from David Jeffrey and Linfield who tabled multiple bids for the 23-year-old which eventually rose to Â£35,000 right up until the closing of the summer transfer window. The United board held firm, but the uncertainty affected both team and player as the Sky Blues were forced to pull themselves away from a relegation battle during the 2008/2009, which one of the few highlights included a Kelbie double in a 2-0 win against Linfield in October.

Kevin captained the side in the absence of the injured Gary Haveron, and was encouraged by Walkerâs ambitious signing of Northern Ireland International Andy Smith to partner him as part of his new look United side. But the continual inconsistency of the side had left the Sky Blues languishing in the bottom half of the table. An Irish Cup semi-final defeat to Portadown in April 2010 proved to be a swansong for Unitedâs leading scorer â who was surprisingly released by Walker at the end of the season. He had scored 75 goals in 181 for Ballymena United.

Despite interest from both Glenavon and Portadown, the striker was given an opportunity in the Scottish First Division, with Greenock Morton. Unfortunately he would only make 13 appearances (and scoring twice) for Allan Mooreâs side.

In May 2011, Kelbie made a surprise return to the Irish League after agreeing a two-year with Marty Quinnâs Glenavon. But injury and loss of form meant that he couldnât replicate his previous form with Ballymena at Mourneview Park, he was subsequently released in January 2012 following discussions with new boss Gary Hamilton. Ironically his only league goal for Glenavon came against Ballymena United in August 2011.

Kelbie returned home to sign for his hometown club, Stirling Albion in Scottish Second Division for the remainder of the 2011/2012 season but he couldnât haul the club off the bottom of the league as the Binos were relegated to the fourth tier of Scottish football. Now 27, Kelbie took the decision to drop down into Scottish Junior football with Camelon Juniors ahead of the 2012/2013 season.