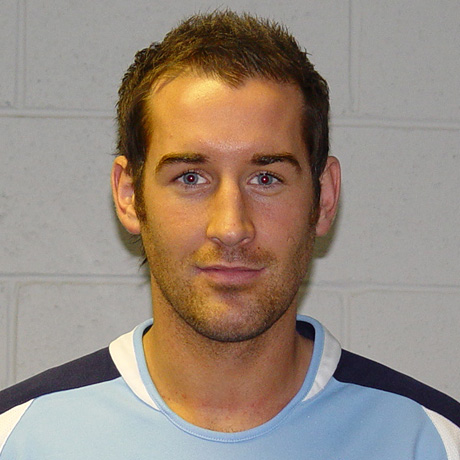 Signed by Tommy Wright from derby rivals Coleraine, Haveron went onto be a hugely popular player and captain of Ballymena United.

Haveron began his footballing career with his local team Larne Youth before being joining Irish League side Crusaders in 1996 as a fresh faced fifteen year old, where he was to gain International recognition at both Under-15 and Under-16 level. He spent just one season playing in the youth team at Seaview before a move to English First Division side, Wolverhampton Wanderers, signing a two-year apprenticeship with the Molineux club in the summer of 1997. Despite showing promising form at Wolves, he failed to make any headway towards first team recognition and was subsequently released by manager Colin Lee, as his contract ended in the summer of 1999.

Gary was thankfully not without a club for long, as Colin Todd offered the eighteen-year-old defender a chance at Bolton Wanderers, who had recently been relegated from the English Premier League. His time in Lancashire was spent in the reserves as again he struggled to break into the first team. After two seasons at Bolton his was released by Sam Allardyce in the summer of 2001 just as Wanderers had clinched promotion back to the top flight.

The summer of 2001 was spent on trial with third tier Swindon Town during pre-season but wasn't offered a permanent deal by manager Roy Evans. However, it was Yeovil Town boss Gary Johnson who offered Haveron a chance to revive his career in the Football Conference. In September 2001 the Larne man signed for the West Country outfit on a non-contract basis and made his debut October, 2001 against Dagenham and Redbridge.

Following only a handful of appearances at Huish Park, Haveron was allowed to leave the club in January, as he joined Welsh side Merthyr Tydfil for the remainder of the 2001/2002 campaign, but yet was given permission to train at Yeovil throughout the week. In March 2002, Joe Kinnear offered Gary a trial at Luton Town ahead of the closure of football league transfer window - but the former Wimbledon boss decided against signing, with Gary left to finish the season with Merthyr Tydfil.

Gary returned home to Northern Ireland, and spent the entire summer of 2002 taking part pre-season at Glentoran, but Roy Coyle decided against signing the 22-year-old defender (despite being included in the clubâs official team photograph). Lisburn Distillery manager Paul Kirk stepped in to sign Gary for his newly promoted side and he quickly became an ever-present in the Whites defence and was even appointed as captain at New Grosvenor Park.

His excellent performances attracted the attention of Irish Cup holders Coleraine, in July 2003. The protracted transfer eventually seen Haveron involved in an exchange deal with Francis Murphy, as he made his debut for the Bannsiders in the UEFA Cup against Portuguese UC Leiria. Manager Marty Quinn moved Haveron further forward into central midfield as Coleraine reached a second consecutive Irish Cup final, however lost 1-0 to Glentoran in May 2004. Gary had already picked up his first senior medal earlier in the season, as his team had defeated Limavady United in the final of the North West Cup. The following season, financial troubles blighted the club with a number of key players already having left (including Rory Hamill to Ballymena United), the club were continually at risk of financial ruin. Haveron stayed with the club through the 2004/2005 season as a credible top six finish was achieved.

With further cuts at the Ballycastle Road, Haveron was surprisingly unveiled as the first signing of newly appointed Ballymena manager Tommy Wright (the pair had previously been team-mates at Bolton Wanderers). Despite the switch in allegiances, the Sky Bluesâ faithful were quickly won over by Haveronâs competitive approach as he became one of the first names on Wrightâs team sheet during the 2005/2006 campaign, in which United narrowly lost the final of the County Antrim Shield to Linfield at Seaview. Despite a disappointing next campaign, Haveron and United bounced back with an impressive 2007/2008 season, which included a 14 game unbeaten streak as the 27-year-old passed the 100 game mark for the club.

Following Wrightâs resignation as manager and the subsequent appointment of Roy Walker, Haveron inherited the club captaincy from Albert Watson. However, the club were in a state of flux after a difficult start to the new look IFA Premiership season, rooted to the bottom of the table it wasnât until December when the club started to pull away from a potential relegation dogfight.
Disaster struck though before Christmas 2008 as Gary suffered a broken leg against Bangor that would rule him out for virtually the remainder of the season.

Having returned to full fitness ahead of the 2009/2010 season, the club captain cruelly suffered another leg break only four games into the new season against his former club Coleraine. It was a hammer blow for Gary, who resiliently forced his way back into the fold in January 2010 in time for the clubâs run to the semi-finals of the Irish Cup, were the Sky Blues agonisingly lost on penalties to Portadown at Windsor Park.

The 2010/2011 campaign proved to be Garyâs last at the Showgrounds, despite being a regular figure in the team over the course of a season that started well and quickly petered out in the New Year, work commitments and Walkerâs attempts to revitalise his squad meant that Haveron was released by the club in May 2011, after six years and just shy of 200 appearances. Back in his native Larne, Gary took the decision to drop down to the Amateur League to join his close friends for a year (2011/2012) at Larne Tech Old Boys before being tempted back to the Irish League with Championship side Carrick Rangers in June 2012 by former Northern Ireland international Michael Hughes.

The 32-year-old was escalated to the position of manager following club owner Hughesâ sudden resignation and despite an indifferent first season in the second tier (2013/2014) and his quiet retirement transition from playing to coaching, he led the East Antrim side to arguably the most successful season in their history the following year by winning the Steel & Sons Cup, Intermediate Cup and the Championship title to achieve promotion back to the Premiership.

Carrick Rangers struggled in the NIFL Premiership during the majority of the 2015/2016 season, but were saved in arguably the most dramatic end to an Irish League season ever, as not only did they come from behind to win their final game in spectacular fashion but a dubious last minute penalty given (and scored) against relegation rivals Warrenpoint Town ensured league survival for Carrick Rangers.

In May 2016, with the dust barely settled on a chaotic end to the season, Haveron resigned from his position as manager after failing to agree a way forward with the clubâs board. In September 2016, he was appointed as the new manager of Glentoran following the sacking of Alan Kernaghan but could only lead the East Belfast side to eighth position in his first season at the Oval.