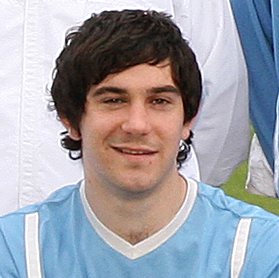 Flying winger that Roy Walker once compared to Pat McCourt, Murray terrorised defences during an 18 month spell at Warden Street.

Discarded as a teenager by Linfield, the Downpatrick based winger quickly made a name for himself at Mourneview Park instead. Fast-tracked through the Thirds and Reserves to the senior team at Glenavon in 2007, many onlookers compared the fearless and dynamic winger to a young George Best (with the resemblance to match!). His startling form at the start of the 2007/2008 sparked some cross channel interest and was rewarded with a two year contract extension.

However, the constant flux of managers at the struggling Lurgan Blues, had most struggling to find any consistency with the mercurial Murray â or at least know how to get the best out of the winger. Marty Quinn came in February 2009 as the latest boss and retained Eamonn for the 2009/2010 campaign. This would be the 21-year-oldâs final season at Glenavon, as despite the struggles to recapture his early form and hold down a regular place at the club he earned his first senior medal, winning (and scoring in) the Mid-Ulster Cup final against Loughgall in April 2010.

It was one of Eamonnâs last games for the club as in July 2010, long term admirer Roy Walker finally got his man in a transfer to Ballymena United. Nurtured by Walker who gave him a licence to entertain in the mould of Pat McCourt, Eamonn thrived at the Braid, especially in the first half of the 2010/2011 season, where he plundered 10 goals for the Sky Blues. It was therefore an even bigger surprise that the winger announced to Walker at the end of his successful first season that he was emigrating to Australia.

Thankfully for Walker, Murray failed to settle âdown underâ and returned sooner than expected â keeping his promise to return to the Sky Blues and also in time for the start of the 2011/2012 season. Eamonn struggled to recapture any of his form in the new-look United team that were struggling at the wrong end of the Premiership table. Tensions rose as Murray went AWOL for a league game at Coleraine, citing travelling difficulties from his home in Downpatrick and eventually it was agreed that his contract would be mutually cancelled in December ahead of the transfer window.

Glentoran manager Scott Young moved quickly to snap him up on an 18 month contract in December 2011, but his new manager only lasted a further month as Young was sacked following an embarrassing Irish Cup defeat to Newington YC. Under new boss Eddie Patterson, Murray found form difficult to come by as the new manager started to stamp his authority on his new team. It was then as the 2012/2013 approached that a persistent knee injury related to tendonitis frustrated Murray and limited any meaningful contribution to the East Belfast clubâs season and also meant missing out on a place in the team for their Irish Cup final victory in May 2013.

Following his inevitable release from the Glens, Carrick Rangers offered Eamonn a one year contract at the Championship club but, disillusioned and frustrated by the injury that curtailed his Glentoran career, he sadly drifted out of competitive football having barely been seen in an Amber shirt.